Background: Carbon dots are a new class of biomaterials that have found a wide range of biomedical applications like cell imaging, targeted delivery, and bio-sensing. A review of the literature reveals that there are fewer reports on nanocomposites prepared by entrapment of carbon dots into polymers.

Objective: A tetra carboxylic acid compound, can conveniently be used as a precursor to synthesize negatively charged carbon dots.

Methods: Carbon dots have been prepared by microwave induced treatment of BTCA so as to have carboxylic groups onto the surface of the carbon dots. Their size distribution was determined by TEM analysis. These CNPs are loaded into chitosan films by solvent casting approach. The water absorption behavior of chitosan/carbon dots nanocomposite films is investigated by gravimetric method.

Results: The size of the CNPs was found to be in the range of 50 to 60 nm with almost spherical geometry. Their zeta potential was found to be -20.2 mV, thus indicating the presence of negative charges on their surface. The contact angle measurements revealed that wettability of plain chitosan film reduced due to the addition of carbon dots. It was found that impregnation of carbon nanoparticles (CNPs) into chitosan film resulted in an almost seven-fold decrease in the water absorption capacity of the film. The equilibrium moisture uptake (EMU) data of plain chitosan and CNPs-loaded chitosan films were interpreted by GAB isotherm and related parameters were also evaluated.

Conclusion: It may be concluded from the above study that BTCA, a tetra carboxylic acid compound, can conveniently be used as a precursor to synthesize negatively charged carbon dots. These carbon dots, when loaded into plain chitosan film, cause an effective crosslinking within the chitosan film matrix. The CNPs-loaded films produce green fluorescence when exposed to UV light. 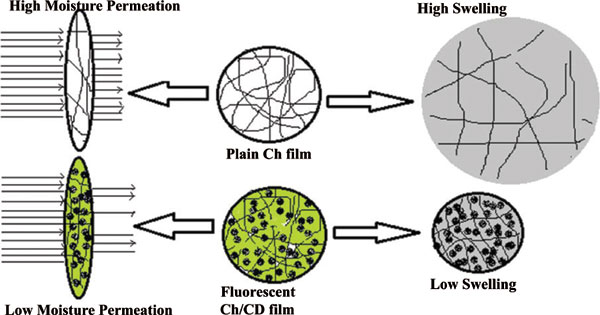