Background: Plant mediated biological synthesis is one of the green approaches that has attracted the attention of the researchers.

Method: Biomolecules present in the plants act as a reducing agent as well as capping agent by which PdII metal gets reduced, leading to the formation of PdNPs. XRD revealed the crystalline PdNPs posses face-centered cubic structure with an average size about 2.87 nm. FTIR showed that biomolecules like proteins are responsible for the reduction of metal ions and form encapsulating layer on the metal ions (capping of PdNPs).

Results: Themorphological study showed an aggregated irregular shape using FEG-SEM. Elemental composition and purity of the PdNPs were analyzed by EDS. HR-TEM revealed the size of the PdNPs from 2 to 9 nm. Antibacterial study of the biosynthesized PdNPs was examined for gram-positive (Bacillus subtilis and Stayphylococcus aureus) and gram-negative (Escherichia coli) bacteria using paper strip method and PdNPs exhibited an excellent inhibition zone against Bacillus subtilis bacteria. Significant antifungal study was observed against Candida albicans from yeast. In vitro anticancer study of PdNPs which act as a drug carrier to kill the cancerous cells was performed on MCF-7 cell line. Compared to the standard drug, PdNPs exhibited potent anticancer activity withIC50 value of 41.37 µg/ml. 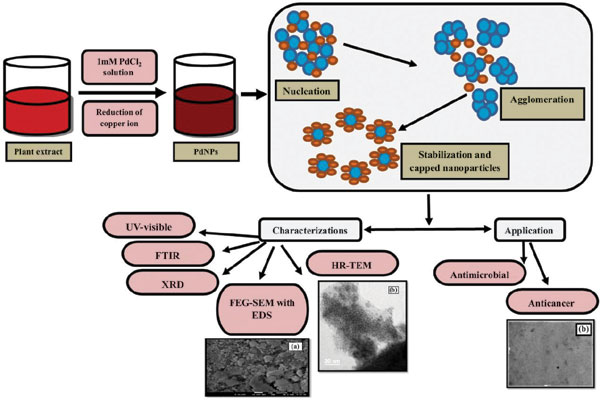