Background: Atomic force microscopy (AFM) is a modern and one the most advanced techniques used in the morphological screening of nanoparticles and other nano and micro biomaterials.

Objective: In this research, we tried to identify the problems and the reasons behind the failed artefacts of the transfersomes made of raloxifene HCl as a model drug, and sodium deoxycholate (anionic), Span 80 and Span 85 (non-ionic) as the surfactants during their characterization by AFM. Method: The critical approach in preparing the test samples for AFM was studied on the mica cover slip. Dynamic light scattering was used to determine the hydrodynamic diameter and zeta potential of the lipid vesicles while high-resolution transmission electron microscopy (HRTEM) was used to measure/determine the particle size. The methods used in the preparation of slides for the lipid-based nano-samples were also summarised in addition to the different materials also used. Results: Hydrodynamic diameter of the formulations was reported as Z-Average values. TSD and TSP-80 formulations showed an average size of 79.96±0.63 and 128.00±0.15 nm, with a PDI of 0.195 and 0.101 with the zeta-potential recorded -17.10±0.21mV and +35.00±0.25mV, respectively. We also observed that the AFM images show a close proximity with HRTEM. AFM shows that external factors such as dilution, selection of slides and preparation of sample led to alteration in the results. Conclusion: AFM characterization was carried out in order to visualise the collapsed and failed artefact due to the use of undefined substrate and methodology. The 3-D images of successful artefact viewed after using suitable conditions clearly showed a distinguished appearance when compared with failed artefact. 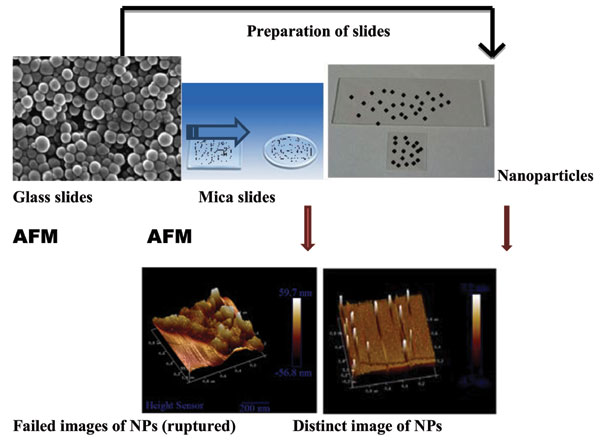