Background: Tuberculosis bacilli has a highly lipoidal cell, which makes penetration of drugs into the cells difficult leading to the development of resistance, which can be overcome by the use of nanonized niosomal delivery system. Many plants of genus Spermacoce have exhibited antibuberculosis activity, which has not been tested for S. hispida.

Objective: The aim of the present study was to study the antituberculosis activity of Spermacoce hispida extracts and develop novel nano noisome based drug delivery system for the extract of Spermacoce hispida to enhance antituberculosis activity. Method: Thin film hydration technique was employed for the preparation of herbal nano niosomes using different non-ionic surfactants (Span 40 and span 60), cholesterol and suitable solvents. Characterization of niosomes was done using photo micrographs, transmission electron microscopy (TEM), entrapment efficiency, in vitro drug release, physical stability and in vitro antituberculosis activity. Results: Nano niosomes were found to be spherical in shape, which was confirmed by photomicrograph. In the preparation of calibration curve, the extract was found to obey Beer’s law in range of 20- 50 μg/ mL. Transmission electron micrographs were obtained for selected batches (SCE3, SCE5, SCE6). The vesicles were of varying size 2-3 μm, 1-2 μm and 3-4 μm, respectively. The drug entrapment efficiency for niosomes was observed in the range of 23.4±0.404 to 82.5±0.472 percent. In the sedimentation studies, the niosomes of three batches (SCE4, SCE5 and SCE6) took 75 days to settle. The release of drug from niosomes containing Span 40 was 51% and Span 60 was 53% in 200 min. It was observed that formulation SCE 3 (71±0.351-50±0.528), showed higher stability over the formulation SCE 5 (57±0.432-49±0.642), SCE 6 (59±0.565-33±0.212). Colour changes were not found in all formulations after twelve weeks. In the in vitro antituberculosis activity, formulations SCE3 and SCE6 were effective at 12.5 μg/mL, while SCE5 was effective at 25 μg/mL, which was better than the chloroform extract. Conclusion: The developed niosomal nano-carrier system exhibited prolonged release of drug and enhanced the in vitro antituberculosis activity of Spermacoce hispida extract. 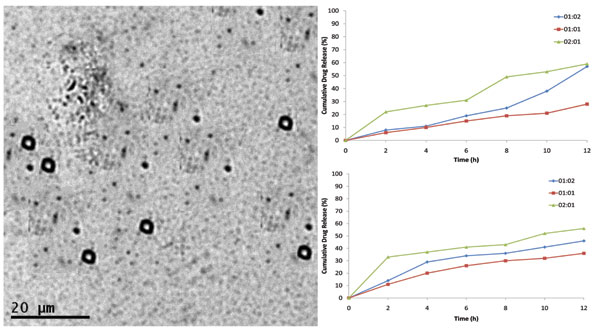